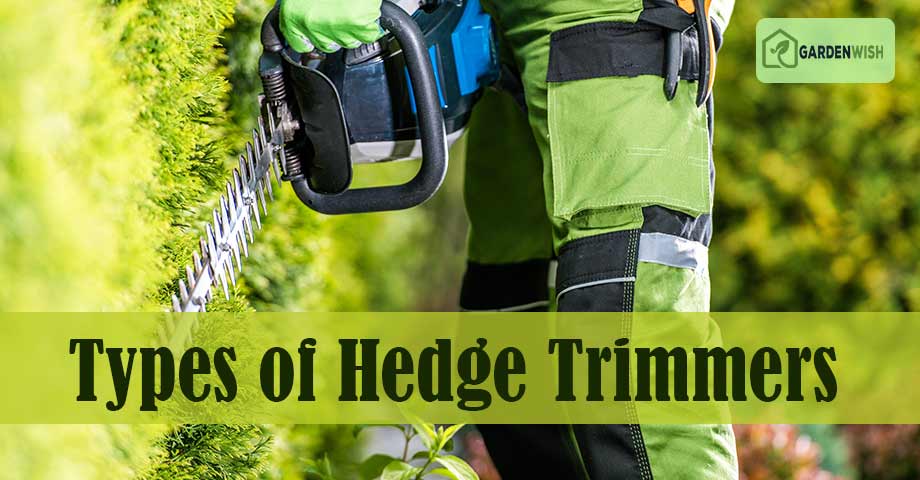 Hedging doesn’t seem fun anymore? Did you have a bad experience with your last hedge trimmer that you want to replace?

There’s nothing bad about looking for the best hedge trimmer. After all, it’s better to spend a few minutes reading this article rather than buying the wrong one and regretting it later.

You may own a landscape with small bushes and shrubs. Some big trees also grew inside the boundary. It would help if you cut the hedges to create shapes beautifully and maintain them as well.

A hedge cutter makes the job much easier. But you just can’t simply buy any hedge trimmer. There are many types of them, and you might prefer one over another. We’ll guide you by introducing each of them so you can decide which one to go for.

You just can’t buy a hedge trimmer that looks good. Instead, you’ve to buy the one that is going to fulfill all your requirements. For that, you’ve to have a better idea about all types of hedge trimmers, and only then you’ll be able to choose the one that’s the best for you. 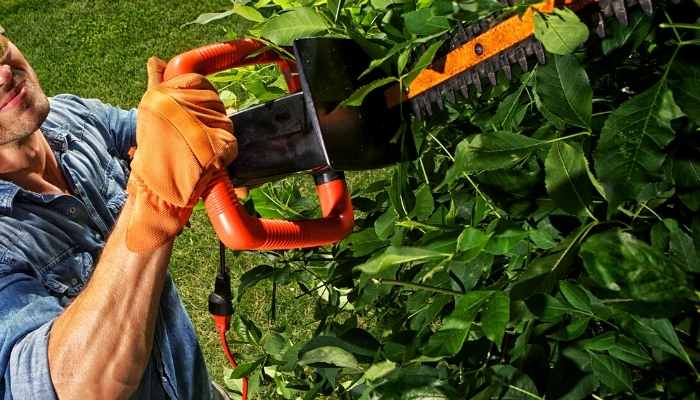 You can already guess by the name itself; an electric hedge trimmer is a hedge trimmer that runs by using electric power. It needs an electric cord with a plug to connect it to a power outlet. So it’s a good choice for people who have a small lawn as the power cord can’t cover a large area.

However, some people get to be seen working with such hedge trimmers on big yards as well. But you’d need to buy an extension cord separately to cover the whole area. These hedge trimmers are usually very lightweight and affordable compared to others.

Also, you don’t have to take the extra pain of mixing oil and fuel to run the hedger as with a petrol hedge trimmer. If you can’t bear loud noises that other hedgers make, electric hedge trimmers are what you are looking for.

But there remains the risk of getting electric shocks while working with an electric hedge trimmer. In addition, you have to trail the power cord behind you while cutting hedges which skyrockets the risk of cutting the cord. Then again, these are very easy to start and work with (another plus point).

Now let’s talk about its power as in the cutting ability. Most electric hedge trimmers are very slow and don’t come with sharp blades like others, making it inappropriate to cut big branches. You’ll also likely spend more time getting the job done with this kind of hedge cutter.

Anyways, if you can tackle these fewer things without much trouble, then this should be your holy grail. 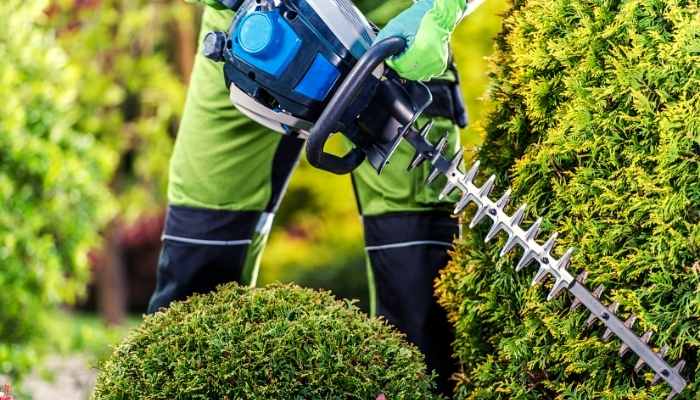 Gas or petrol hedge trimmers run on fuel. You need to mix fuel with engine oil in the proper ratio and load the fuel tank. This is the type that is being used by professionals mostly.

If you have a large lawn with big trees, then go for this, undoubtedly. But as they’re a lot heavier than electric hedgers, they’re a little difficult to work with. So avoid buying it if you don’t like to carry heavy machines.

Coming to power, gas hedge trimmers are the best of all. They have the highest strokes per minute to cut big branches in minutes without much effort. Though some of them make unbearable noise, others come with little to no noise at all. These might be a little pricier than others and require high maintenance.

The blades are really sharp and strong, which is another reason they can cut big branches easily. Some people buy gas hedge trimmers because their long blades reach even the highest branches and cut them. You’d need to wear ear protection and heavy gloves while working with these.

They don’t have a power cord hanging behind, unlike electric hedge trimmers, so it’s easier to work with a gas hedge trimmer than an electric one. This also reduces the risk of cutting the cord again and again.

If you’re a nature lover, you may not like gas hedge trimmers. They use petrol, and we know this is harmful to the environment, many people have stopped working with it for this reason. Also, these trimmers are a little difficult to start. You’re supposed to spend a few minutes just to start the device. 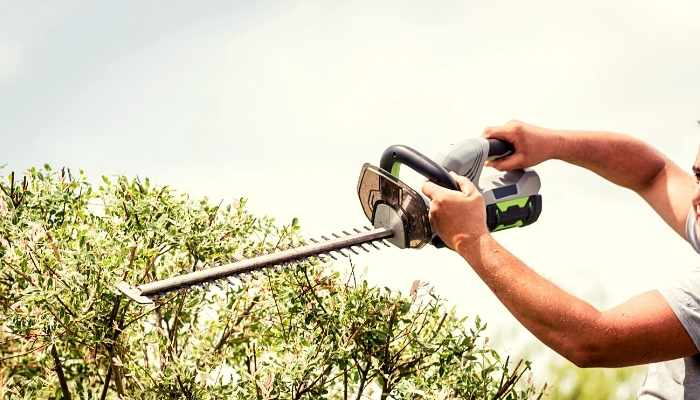 Do you own a big yard with beautiful shrubs and trees? How easy do you find it to trim the hedges with an electric hedge trimmer?

We know you don’t even want to talk about it. But, as you’re replacing your old hedge trimmer, why not think about a battery hedge trimmer? It’s cordless, so you are going to enjoy each trimming session without worrying about the power cord.

Battery hedge trimmers are cordless and very easy to start; that’s why big lawn owners are going crazy on it. It’s also more powerful than electric hedge trimmers, if not as powerful as gas hedge trimmers. But there’s some controversy.

Some people say they find both as powerful. But the problem is with the battery. It can last only around 20 minutes or so, although some can last for an hour. These batteries take a long time to recharge, nearly for an hour. So it would be best if you bought another battery to work on a large area.

In this case, you have to buy batteries separately to make the hedge trimmer work. This doubles the price of a battery-powered hedge trimmer.

Not to mention, each battery may cost you nearly the price of the hedge trimmer itself. Again after a year or more, you might have to buy new batteries as old ones have started troubling you. So keep these things in mind before buying this type of hedge trimmer. You better avoid it if you don’t like to spend so much on hedgers.

What Things to Look for While Buying a Hedge Trimmer?

Other than the hedge trimmer toes, there are a few more things that you might want to consider before you invest your hard-earned money in it. You should keep the following things in mind before buying a hedge trimmer…

The first thing to check while buying a hedge cutter is its power. It could be a gas hedge trimmer or a cordless one, but the power varies from model to model. Depending on your demand, you have to ask the dealer to show you the very powerful ones, medium or low. Just because you’re buying an expensive one doesn’t mean that it will be very powerful.

We know the electric ones are cheaper than others, but they can be more expensive at times. Don’t let the fancy look fool you to buy a good-for-nothing hedger at a high price. If you’re thinking of buying gas hedge cutters, some cheaper models also work, and the expensive ones.

Don’t buy battery hedge trimmers if you’re trying to buy budget-friendly ones because they may seem to be very pocket-friendly at first, but it skyrockets when you’re buying extra batteries and chargers later on. Also, you’re going to replace the batteries a few times in the lifetime of the device.

Most users make mistakes at this point. They don’t seem to be worried about the warranty, and we don’t seem to find a valid reason for it. So what should you expect? Most hedge trimmers have a warranty. You may look for three to five years of warranty so you can worry way less. You can get the servicing done if any problem occurs within the time limit.

It’s a very important thing to check. Because you might not be a bodybuilder, most people don’t like to carry a heavy hedge trimmer as it can be very daunting to plant and cut the hedges and branches with such a heavy device. The weight draws your attention away, and you can’t pay much attention to the trimming job. Look for the lightweight models instead.

Gas trimmers are perfect for those looking for a hedger to cut big branches and have a large lawn. Though it is difficult to start and the fuel mixing thing is a little boring, it’s very powerful, so it helps make the job done easily.

On the other hand, electric hedge trimmers are lightweight though less powerful and easy to maintain. You don’t have to worry about the fuel availability or take the trouble of oil and fuel mixing.

Battery hedge trimmers can be taken anywhere, unlike electric ones. These are very easy to work with, but the battery doesn’t last long, and the battery’s lifespan is too short.

You also have to think about the maintenance if you’re lazy regarding cleaning the machine. Gas and battery hedge trimmers are high maintenance compared to electric hedgers. Keep all these things in mind before you choose your next hedge cutter.

Advertiser Disclosure:
We may receive commissions on purchases made from our chosen links. However, this does not impact our reviews.